After spinal cord injury, bladder function is completely out of control. This relevantly impairs patients’ quality of life and might jeopardize the upper urinary tract (i.e. resulting in kidney failure). The most dangerous situation is detrusor sphincter dyssynergia where the urine is squeezed through the contracted (dyssynergic) sphincter. This causes high intravesical pressure and might impair kidney function in the long-term. However, the underlying neuronal mechanisms are unclear and there are no causal therapies for this potentially life-threatening disorder.

Against this background, a novel project was launched to explore the neuronal mechanisms underlying detrusor-sphincter-dyssynergia.
Marc P. Schneider, an enthusiastic young resident-in-training, was keen enough to take the challenge and with the support of the Swiss Continence Foundation he started the project in 2013.
In the following he will report on the project and his first experiences and progress.

The first part of my project was the establishment of a new translational urodynamic model for analysis of lower urinary tract function in rats. When I planned in 2012 the project and went through the literature I figured out that most animal experiments using urodynamics were performed in anaesthetized animals only.
However, it is well known and described in humans that all kind of anesthetics have an influence on bladder function. Therefore, we decided to use only techniques allowing urodynamic assessments in awake animals. After extensive literature screening I found one group from Charleston, South Carolina, USA, that used an interesting new system that allows to assess the bladder pressure in freely moving and awake animals, but there were several problems such as moving artifacts and a complete lack of urethral sphincter assessment (i.e. in analogy to pelvic floor electromyography (EMG) in humans).

Since no research group in Europe used this new technique, we contacted Dr. Francis M. Hughes, Jr from Charleston, South Carolina, USA for more details on the method. After some email exchanges, we all agreed that this method needs some modifications, but that it will be the way to go. Dr. Hughes not only agreed on teaching me the method and surgical procedure but also invited me to stay in his house for the whole period. I then submitted a grant application to the non-profit organization Swiss Continence Foundation to support my (at that stage quite risky) project. I was delighted to learn that the Swiss Continence Foundation fully funded my research stay in Charleston and later in Vermont, in the North of USA, where Catamount research is housed, the company that produces the basic bladder pressure measuring setup, to further improve my knowledge on this exciting technique.

In February 2013, I traveled for the first time to the Medical University of South Carolina in Charleston and Dr. Hughes cached me up at the airport and brought me directly to the lab.
During the next weeks, I learned some southern slang as well as the urodynamic technique in awake rats. In particular great was the fact that I was able to do first pilot trials with spinal cord injured animals, since Dr. Hughes was also active in this field. Basing on these preliminary data I applied for an MD-PhD scholarship of the Swiss Academy of Medical Sciences (SAMS). Thanks to the already very detailed MD-PhD project concept elaborated by Professor Martin E. Schwab, PD Dr. med. Thomas M. Kessler and myself, my application for the MD-PhD scholarship was finally successful and the Swiss Continence Foundation funded the whole urodynamic equipment for more than 30`000 US$. Together with the computer scientists from the Brain Research Institute, University of Zürich and ETH Zürich, I developed a new software and electromyography (EMG) amplifiers that were implemented into our urodynamic measurement system. Thereafter, PD Dr. med. Thomas M Kessler and I have developed a novel technique for chronic implantation of EMG electrodes close to the urethral sphincter for EMG assessment. For the first time, we were now able to assess lower urinary tract function including urethral sphincter EMG in awake rats.

For further refinement of our newly developed urodynamic setup, I visited again Dr. Hughes at the Medical University of South Carolina in Charleston in January and February 2014 and also this second research stay was generously funded by the Swiss Continence Foundation. Thanks to the enormous help of Dr. Hughes we refined our urodynamic model resulting in the publication “A novel urodynamic model for lower urinary tract assessment in awake rats”

The collaboration over such big distances would not have been possible without the generous financial support of the Swiss Continence Foundation and I would like thereby to thank the Swiss Continence Foundation to bring the neuro-urological field forward and I strongly hope that we will be able to use this novel model to better understand the underlying mechanisms of detrusor sphincter dyssynergia and to establish first causal therapeutic options. 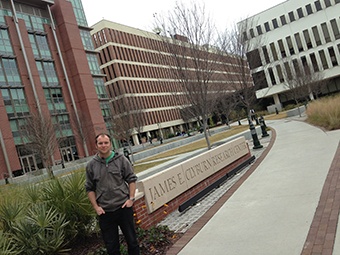 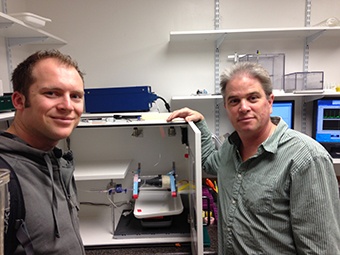